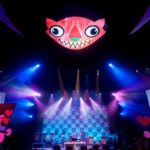 Last night was Alice’s trip through the Rabbit Hole. When greeted by the White Rabbit at the front door, you’ve got no escape but to plunge head first into this fantastical “Alice In Wonderland” themed holiday party. The graphic style of Chicago illustrator David Csicsko worked perfectly as the visual inspiration of this party. Working • Read More » 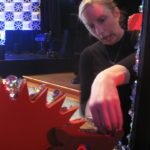 Tomorrow is the big corporate holiday party we’ve been working on for weeks! So much fun to finally see it all come together. And our Crew was right there building, hanging, setting, draping all over the Park West. We had most of today to get a lot of the structural work done, and then tomorrow • Read More »

The characters of Wonderland are coming together nicely. It’s great to see the Queen of Hearts & Mad Hatter all grown up. Now 8-feet tall & dimensional instead of the flat illustrations we’ve been working from. They’re looking pretty dapper from any direction! 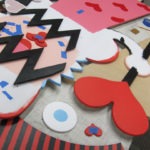 Now that the designs are done & approved, the ICA Team is well underway creating a little Wonderland. The flat, graphic designs by David Csicsko have been translated & converted into layered pieces. Each layer a different color. Giving every scenery piece some dimension & fun. At some point, it became a big jigsaw puzzle • Read More »

A Design Day With Alice 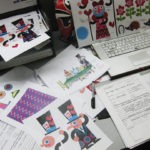 We’ve very excited to have been contracted to do another corporate holiday party for one of our favorite clients. The theme this year is “Alice In Wonderland”…with a twist! Not your typical Disney characters. Not your well-know Tim Burton characters. Instead, the client has connected us with Chicago artist David Csicsko to do some graphic • Read More » 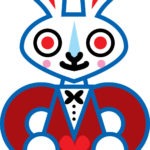 Thank you David Csicsko for this wonderful drawing… visual inspiration for good things to come!!!